The seventeenth step in my A-Z of quirky ancestor antics - Q is for quarrying in Paradise, Purgatory and Hellhole

One of my great-great grandfathers, Patrick FLEMING, was a quarryman. He quarried the golden sandstone of Sydney in the 1860s and 1870s. 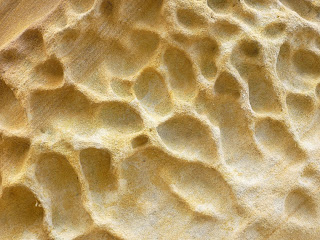 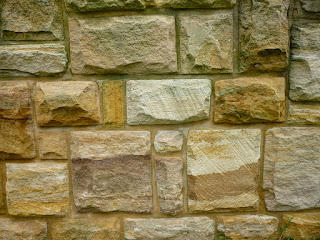 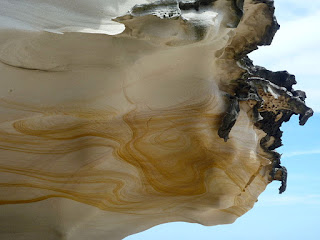 After marrying Ellen or Eleanor TORPY in Windgap, County Kilkenny, Ireland on 3 February 1853, he arrived in Sydney with his new wife some time at the end of 1853. Although he was described as a farm labourer on his shipping records, he spent most of his life working as a quarryman in the quarries in Pyrmont, especially in the 1860s and 1870s.

Patrick was mentioned in an article I found in The Sydney Morning Herald that was published on Monday 27 Sept 1869.

Excerpt from article in the The Sydney Morning Herald, Monday 27 Sept 1869.


This article explained how a man named Richard Guilfoyle was killed during a rock fall at one of the Pyrmont quarries that Patrick Fleming was leasing, with Richard Dunn. The article describes the location of the quarry as being near the Blackwattle Swamp Bridge. Based on my analysis of some old maps, I think that the quarry where he worked may have been close to where the quarry known as Purgatory was located, near the Blackwattle Swamp Bridge.

However, when I recently contacted Shirley Fitzgerald, an historian who had conducted a vast amount of research about the streets of Sydney, she suggested that the Blackwattle Swamp Bridge was near the present day Bridge Road. The quarry known as Purgatory was the closest to this area but Shirley explained that there were several quarries in 1869 that were dotted along the area near the Blackwattle Swamp Bridge up to Quarry Street, and Patrick could have worked at any of these. The three well known quarries, called Purgatory, Hellhole and Paradise, seemed to have been in operation after 1869, according to Shirley Fitzgerald, so my ancestor may not have worked in any of these three famous quarries but he certainly worked nearby either Purgatory, Hellhole and Paradise! 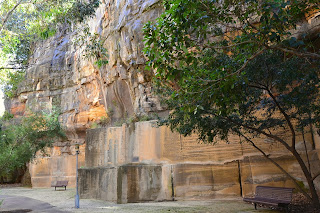 
Patrick FLEMING died on 12 October 1880 at Little Abercrombie St, Sydney (Chippendale) and was buried at the Catholic Cemetery in Petersham although this cemetery has since been closed.

I hope he's in Paradise now. 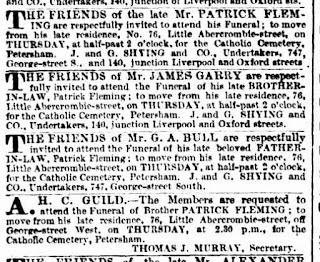 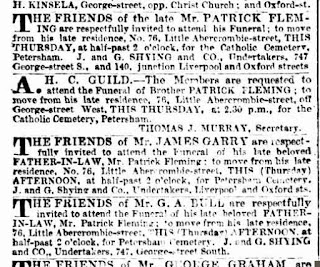 Other blogposts about Patrick FLEMING:


Death in a Pyrmont quarry


* Sources of sandstone graphics above: