Getting my hands on original records

Last Tuesday, I made the effort to get out to the Western Sydney Records Centre where so many original family history records from NSW are stored. I had been meaning to get there for many years. Of course, I didn't leave enough time to see all the records I had hoped to access on my wishlist, but I did get to see quite a few. After applying for a "reader's ticket", the staff at the centre described the process I needed to follow to access the records. It felt like I was in an old-fashioned government office with so many forms to fill in with pencils but the staff were all very helpful and knowledgeable.
The highlight of my visit was touching (with gloves on) the original bankruptcy records that documented the financial problems that my great grandfather (1886) and my great grandmother (1890) experienced in Bourke, NSW.
My great grandfather used several names during his life in Australia but he chose to use the name Walter Stafford Northcote for his bankruptcy records. He was also known as Walter William Northcote, William Walter Northcote and George Bede Northcote at various stages of his adult life. The online index entry of his bankruptcy records led me to finding these original records at Kingswood. 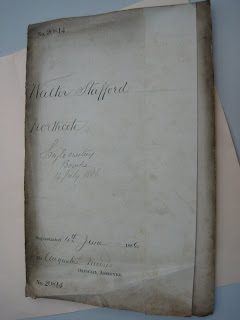 The bankruptcy records record how he owed sums of money to various people. He claimed:
"I attribute my insolvency to the following reasons:
(a) Pressure of creditors
(b) Inability to obtain permanent employment"
Sadly, his only property of any value was listed as "wearing apparel" valued at £2. At the time of his bankruptcy, he was responsible for his wife, Margaret, his 7 sons and 2 step-sons. It must have been a desperate measure to file for bankruptcy, especially as he lived in such a small town in western NSW where, I imagine, it would be difficult to hide such financial problems.
Seeing and touching these records brought his plight to life for me. I could see the records, touch them and experience their musty, dusty smells. I was touching and seeing the papers that my ancestors touched and saw. Also, I was able to see his handwriting and his signature:

For some reason, I was pleased to see the flourish at the end of his signature. Somehow I was able to interpret this flourish as a bit of self-esteem at a difficult time. However, I could be wrong!
Two years later, poor Walter died in 1888, leaving his wife to care for 9 sons, one of which was my grandfather, Leo Bertie Bede Northcote, who had only just been born the year before in 1887. As you can imagine, Margaret Northcote, nee Riley, experienced very difficult times.
In 1890, Margaret herself claimed bankruptcy and the original records of this bankruptcy were also available to look at, touch and smell at the Western Records Centre at Kingswood. I found the index to Margaret's bankruptcy online but seeing the original records at Kingswood was a much richer experience that seeing the plain old index entry. 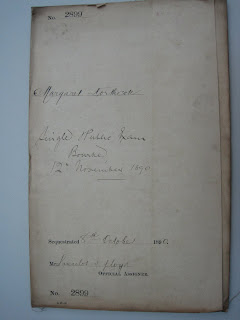 Again, it was very sad to read about Margaret's financial difficulties. This is how she explained the cause of her bankruptcy:
"I am a widow with 9 nine children. It is my housekeeping expenses that has caused my bankruptcy."

She signed her name a few times throughout the document.

Seeing her original signature was both touching and useful. I could then match her signature on this document with other documents I have, such as an early marriage church record from 1866 when she was living in Orange, NSW and known by her maiden name, Margaret Riely.

Seeing and reading through these bankruptcy records highlights how difficult times in the past were for some of our ancestors. No doubt the severe depression that Australia experienced in the 1890s made this time even more difficult financially. I can only guess that such a depression was felt strongly in rural NSW.
The round-trip from home to Kingswood for me took about 4 hours. Despite the distance, I'd recommend visiting this centre to other family historians. The two hour trip to get there was well spent, anticipating all the records I was able to find. The two hour trip to get home was also well spent, contemplating the records I had just seen. It's worth the effort.
Posted by Maria at 13:47 7 comments: