Memories of a super dragster Christmas and a super Dad

I've really enjoyed reading blogposts lately about different people's memories of Christmas days gone by. One of my own memories keeps coming to the surface and it makes me smile every time. Remember back in the 1970s (that long ago!), it was a very BIG THING to get a bike for Christmas. It was an even BIGGER THING to get a bike that was new from a shop, not a recycled and repainted hand-me-down.
I'm not sure exactly what year it was, but it was the early 70s. Us three kids all received a shiny new bike on Christmas morning - one each! My sister and I were lucky enough to get the most trendy bike of the day - yes, a dragstar with a politically innappropriately-named sissy bar and all! We were impressed. So was my brother ... he was impressed not to receive a dragster because they were seen as girls bikes back then. Even so, I'm sure he was impressed to be a member of a household that included two groovy dragsters. However, the most impressive thing was still to come. You see, there were quite a few other kids in the neighbourhood who also received bikes that Christmas. We were all keen to try our new bikes in a bigger space besides the suburban streets outside our homes. Can you imagine? About 10 or so kids with new bikes itching to give them a spin, circling the parked cars and the street trees in the narrow streets of suburban Sydney. Instead of sitting around relaxing on Christmas day, our great Dad decided that he'd take us ALL down to the local oval which had some nearby flat ashphalt (a new bike owner's dream!) so that we could test out our new wheels. Yes, not just his three kids but the whole neighbourhood of bike-riding kids. It must have been a strange site, a forty-something year old man walking along at the front of a pack of kids on bikes. He was a king of the kids that day, and a king of the kids-on-bikes as well, not to mention a king especially in his own kids' eyes.
Our Dad did a lot of things like this that I'm only just appreciating now in later years. Picking us up from discos at all hours of the night, dropping us off at friends' places near and far with his voice echoing in our ears, "Remember love, no matter time it is, ring me and I'll pick you up." What a Dad he was.
Thanks Dad for the bike, for the trek to the oval on that Christmas Day way back in the 1970s and most of all for the memories. Wish you were still here with us, especially at Christmas time.
In loving memory of our dear old Dad,
Carew Joseph Trevor NORTHCOTE (1932-2002) 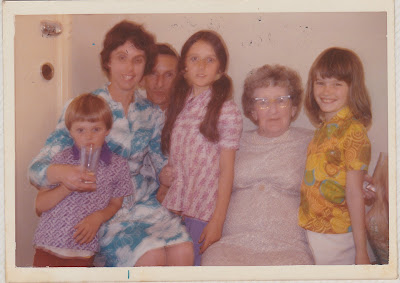 Quite a few family history researchers I've spoken to have come across torn or damaged photos in their family's collections. Why do these photos get partly destroyed? I suppose there are a few reasons - split marriages, convenience, wear and tear. I've included a few bits of photographs in this blog entry from my own family's collection of ripped memories. Do you have similar photo remnants and do you know why they are not in their full original state?
This is a photo of my father, Carew NORTHCOTE (Junior), when he was about 2 years old. It was taken at the back of the Royal Hotel (now the Ten Dollar Motel) at Gulgong NSW in about 1934. My father is being held by his uncle, Carew NORTHCOTE (Senior), who was the publican of the hotel at the time. My grandmother, Ellen NORTHCOTE (nee Keneally/ Kenelley), is standing next to Carew Senior. We think the woman whose face is partly cut off in the photograph may have been Carew Northcote's wife, Edie, or his daughter, Joyce. We're not sure why the photo has been torn across the bottom - perhaps it was folded at one stage and the bottom section just fell off and was discarded. 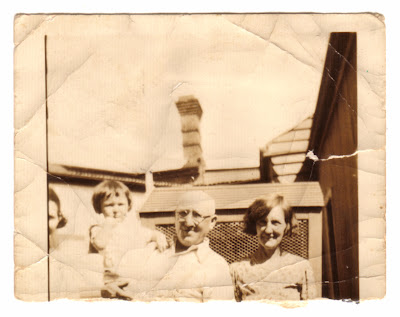 The younger of the two flowergirls in the wedding photograph below is my grandmother, Lily Anne (or Ann) KINGSBURY. We think the photo was taken around 1906 when Lily was about 4 years old. The other people in the photograph have yet to be identified. The photograph was more than likely taken in Sydney. 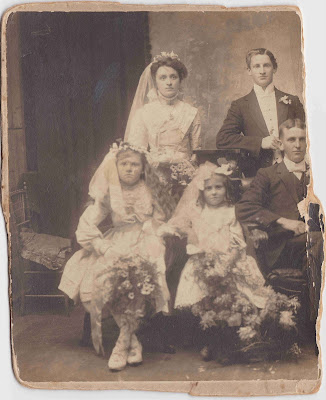 Of all the ripped and damaged photos we have collected so far in our family, this is the most mysterious ... whose feet are these, what period of history do the shoes appear to fit into, where is the upper section of the photograph, why was this torn photograph kept? 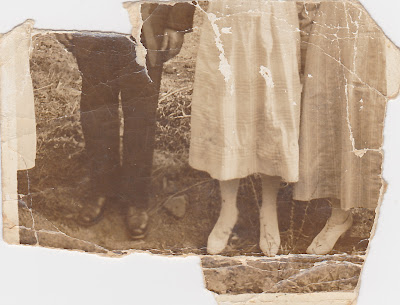 Seven colours of a cemetery rainbow

On a trip to Tasmania last week, I was fortunate enough to find a few lovely, old cemeteries on my travels. The classic Tasmanian summer weather of regular sun showers mixed with bouts of sunshine turned out to be the perfect recipe for a good spot of cemetery visiting.
While driving towards Geeveston, a small town in southern Tasmania on the Huon River, I came across the Jackson's Point Historic Roman Catholic Cemetery just outside the small town of Franklin, about 45km south of Hobart. 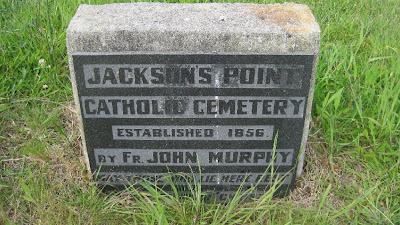 Franklin
View Larger Map
Although I'm not related to any of the people buried here (well, not that I know of, anyway), I couldn't resist stopping along my journey to visit this little historic Catholic cemetery. The sun came out for a convenient 15 minute period - just in time for me to take a few snaps and appreciate the beauty of this hillside cemetery which looked over the Huon valley and river below. 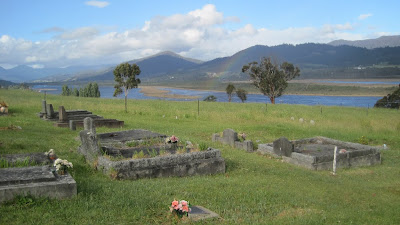 Of course, sunshine in Tasmania is often followed by rain (I guess that's why it's so green on the island) and rain it did soon after my 15 minutes of cemetery traipsing. However, the rain came hand-in-hand with a beautiful rainbow that spanned the valley, it seemed to link the cemetery with the mountains across the valley. What a scene! 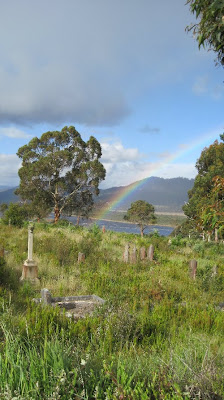 What was also interesting about this cemetery was the variety of crosses that marked the graves - all sorts of Celtic crosses on both new and old graves. Most of the crosses were carved from stone, quite grand most of them. 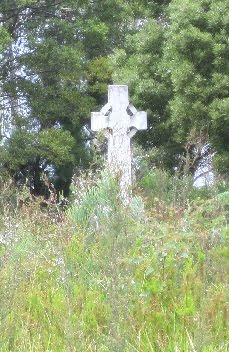 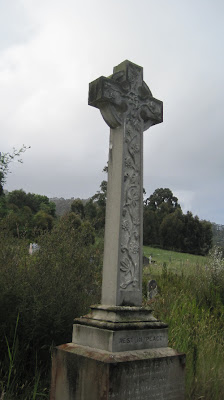 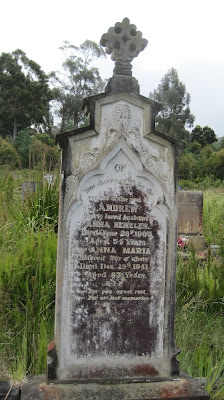 As with many of my cemetery visits, I often find their is one special grave among all the others that really highlights the sadness of losing someone. This tiny, simple wooden cross got to me ... it made me wonder whose grave it marked. Perhaps it was a recent grave, perhaps it was the grave of a child, or a loved partner, or an honoured parent or a cherished friend. It reminded me of the many unmarked graves that I've discovered in my own family's history. 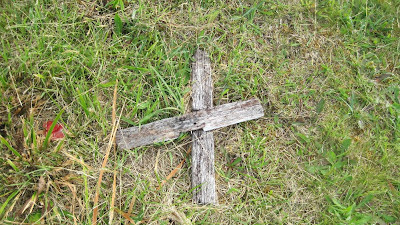