After searching for the grave of my great-great-aunt, Honorah/ Hanora/ Hannah/ Annie STAPLES (nee CARRICK) for almost a decade, I found it yesterday at Rookwood Cemetery. With the help of the GPS coordinates on the Deceased Search on the Catholic Cemeteries website, and just a bit more time, I came across her grave. It was quite a lovely moment, especially when I realised she had a headstone, was buried with two of her young sons and was in sight of the graves of her four other siblings who arrived with her in Australia in 1880.

In the blog post below, I will refer to her as Hanorah as this is the name on her gravestone records.

Hanorah was the sister of one of my great grandmothers, Catherine KINGSBURY (nee CARRICK). She is my 2nd great-aunt.

Who was Hanorah STAPLES (nee CARRICK)? 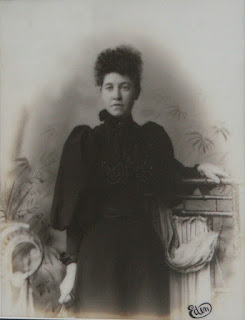 Hanorah STAPLES, nee CARRICK approx. 1900
[Photo courtesy of Catherine Elder, one of Hanorah's descendants]
Hanorah STAPLES was born as Hannah CARRICK on 20 December 1872 in St George, Lancaster in the County of Lancaster, Lancashire England. Her parents were Thomas CARRICK and Catherine HIGGINS, both of whom were from Tuam, in County Galway in Ireland. Thomas and Catherine moved to England from Ireland and married at the Church of St Philip and St James, Chapel St, Edgeley in the District of Stockport in the Counties of Cheshire and Lancaster on 19 November 1859.

Hannah's parents, Thomas and Catherine CARRICK, had a number of children in England after they were married:
* It seems that James did not travel with his family to Australia.

Hanorah arrived, wither her parents and four other siblings, in Sydney from England on 27 October  1880 on the ship, La Hogue.

She married Edgar Nathaniel STAPLES in Sydney in 1900 and had a number of children between 1901 and 1916, including:

When did she die? Where is she buried?

Hanorah STAPLES died on 13 May 1916 and was buried on 15 May 1916 at Rookwood Cemetery. Five years before her death, one of her young sons, James Rowland STAPLES died on 23 October 1911 when he was only 3 years old and was buried in this grave on 24 October 1911. The other son buried with Hanorah was her little 6 month old son, John G STAPLES. He died on 25 November 1916 and was buried in the grave with his mother and elder brother on 27 October 1916. It seems that Hanorah died soon after the birth of this last child, John.

Hanorah's grave is located in a beautiful spot at Rookwood Cemetery. 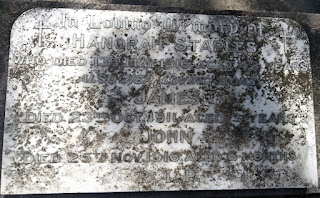 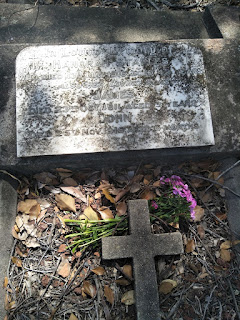 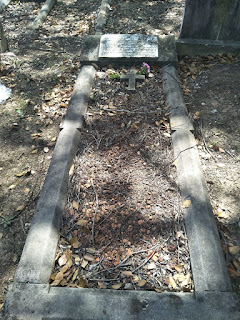 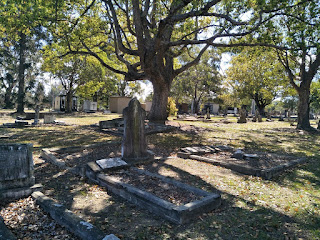 Some help with finding her grave


I had been looking for Hanorah's grave for many years. I did get close a few times but, because I'd visited the cemetery on such a hot days in the past, I hadn't persevered in my search. Some of my notes about my searching records show comments like "Think I got close today but it was too hot to keep searching". Before the cemetery visit yesterday, I found the latitude and longitude coordinates of her grave, according to the Deceased Search on the Catholic Cemeteries website. When I typed these into Google Maps on my phone, this didn't take me straight to the exact location of her grave, but I was taken to within 50-80 metres of her grave. This was enough to get my preconceptions out of my head about where I thought she was. I had also searched for a few of the names of other people buried nearby (William John HUTTON, grave no. 588; Lucy MARTIN, grave no. 589; Robert BUTTERS, grave no. 595), so when I found these nearby graves, I knew that I was close to Hanorah's grave. 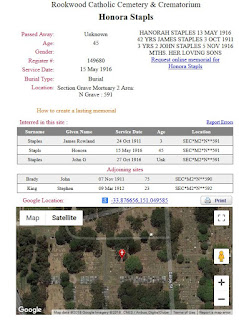 Because I had had so much trouble with finding Hanorah's grave in the past, I had assumed that she did not have a headstone so I was especially surprised when I did find her grave that she did have a headstone. It was quite an emotional moment because I felt I had let her down in the past by not finding her grave. That sounds a bit silly when I type this but I'm sure other family historians will understand this sentiment.

Close to her siblings in life and death

Hanorah travelled with her parents and four other siblings, Mary Ann, Thomas, Patrick and Catherine, from England to Sydney in 1880. They all lived around the areas of Rozelle, Balmain and Auburn in Sydney. At one stage, Hannah lived at no. 8 Red Lion St, Rozelle, next door to her sister Catherine and her family at no. 10, and just around the corner from her parents and her eldest sister, Mary Ann.

Hanorah's grave is in sight of her four siblings' graves who are also buried in Section M2, Catholic Section N at Rookwood Cemetery. Their grave numbers are:


The photo below shows the location of the five siblings' graves. 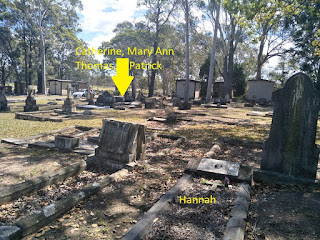 Although her life was short, it appears to have been lived close to her other family members. In death, she is not alone and is close to her dear siblings and some of her children.

P.S. Thanks to Janelle for the nudge to come along to the cemetery yesterday for the Rookwood Tour Day.
Posted by Maria at 12:54 No comments: