This is the first step in a journey I hope I can finish - I say that because I've started an A-Z journey or two like this before and it's petered out into nothingness. So, I hope to make more of an effort in this A-Z attempt which is sort of part of the Blogging from A-Z Challenge. Thanks to the April Host Team for their inspiration.

The theme of my April A-Z blogging challenge is Quirky Ancestor Antics.

I'm going to attempt to make my blogposts less rather than more, in the hope that I can achieve shortish, quirky blogposts rather than longish, lustrous ones. So here goes ...


A is for Aloysius


This was one of the first names of one of my great-uncles on my father's side of the family. His full name was Aloysius Carew Standish NORTHCOTE but he was known as Carew throughout his life. My father was named after him, one of his nine uncles.

By all accounts, Carew, was a jolly, generous, sociable man. I think my favourite descriptions of him comes from an account of his life on page 10 of the Mudgee Guardian and North-Western Representative, on Monday 20 December 1937 (a week after his death).

Carew Northcote has gone. He has been called to the Great Beyond, and Gulgong has lost one of its finest citizens, and of the best, most kindhearted and generous of men. His death in the Gulgong District Hospital on Monday evening last has saddened the community, in which he had been an esteemed, characteristic and popular figure for about five years.

Carew always wielded an influence for good. The good that he did cannot be measured on earth, but it is known in a Higher Place. The down-and-out never went to him in vain. There was always practical help and good and wholehearted advice. He helped many lame dogs over life's stile. 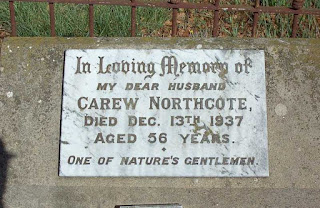 Here are some more links and blogposts about this man: