A mixture of myth, legend, clues and facts - Were the NORTHCOTE boys of Bourke footballers?

This morning I sat down to look through TROVE (online digital newspapers at the National Library of Australia site) to search for clues of a story I had heard about my NORTHCOTE ancestors about the time they lived in Bourke, a town in far western NSW, in the late 1800s to the early 1900s. I've been told that many of my grand-father's brothers were footballers in Bourke. In our family, they are known as "the NORTHCOTE boys".

[By the way, for regular viewers of my blog, I think I have now managed to change the settings to make it easier to comment on my blogposts.]

I've recorded my research methods below to show how valuable old newspapers can be and to show how they also require a critical eye, as not everything printed in them can be treated as fact by family historians.

The footballers of Bourke may have worn clothes similar to, but probably of a different quality, that the NSW Rugby team, seen below in 1910.

NSW Rugby Team 1910.
Author: Contributor(s): Melba Studios.
This image is of Australian origin and is now in the public domain because its term of copyright has expired. Located at: http://en.wikipedia.org/wiki/File:StateLibQld_1_135567_New_South_Wales_Rugby_League_team,_first_to_come_north,_1910.jpg

Engraving of the first intercolonial football match between Victoria and South Australia at the East Melbourne Cricket Ground, 1879.
This image is of Australian origin and is now in the public domain because its term of copyright has expired. Attributed to: Alfred May and Alfred Martin Ebsworth. Located at: http://en.wikipedia.org/wiki/Australian_rules_football#mediaviewer/File:Intercolonial_Football_Match_1879.jpg

Source of the story

Many years ago, one of my father's cousins, also researching the NORTHCOTE family history, told me that some of the NORTHCOTE boys, my paternal grandfather's brothers, had been active football players in Bourke when the family lived in this town in the late 1800s and early 1900s. There were at least nine "NORTHCOTE boys" including the two older stepbrothers who could have also been considered part of this group as my great-grandmother, Margaret Ann NORTHCOTE (nee RILEY), had nine sons to two husbands during her life:

When I searched through the newspapers local to Bourke in the 1800s and 1900s, I found the following articles which provide evidence that some of the NORTHCOTE boys did indeed play football in Bourke. The team they played for were known as the Bourke Rovers.

Both A. Northcote (possibly Alf NORTHCOTE or Arthur NORTHCOTE) and P. NORTHCOTE (probably Perc NORTHCOTE) were mentioned as members of the wining Bourke Rovers football team on 31 October 1900 on page 2 of the Western Herald. 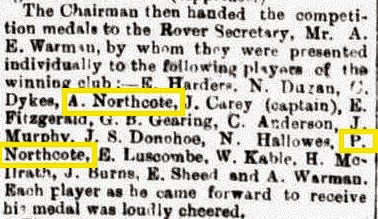 The full article can be accessed here: Football, an article on page 2 of the Western Herald on 31 October 1900.

From the Wellington Times, 22 September 1902

The NORTHCOTE name is mentioned in an article titled "Fancy Dress Football Match" in association with football in Bourke on page 2 of the Wellington Times on Monday 22 September 1902. 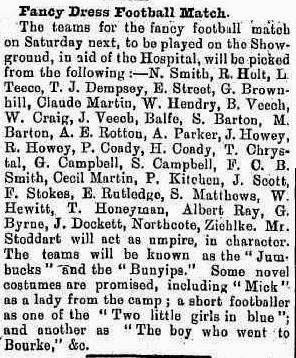 From the Wellington Times, 25 September 1902

A few days later, another article was included on page 4 of the Wellington Times, promising a "novel and very entertaining afternoon's fun". “Northcote” was listed as being dressed up as a Governess in the Bunyips team. It's strange that an initial was not mentioned to give us a clue about which of the NORTHCOTE boys this article is referring to but the article after the event (see below) lists A. Northcote which could have been Arthur Francis NORTHCOTE or Alfred Joseph NORTHCOTE. 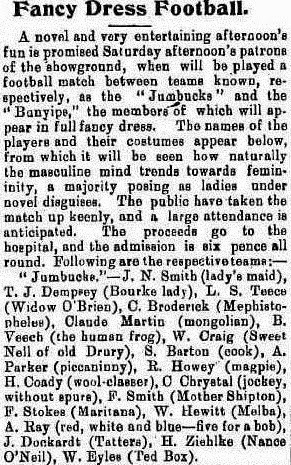 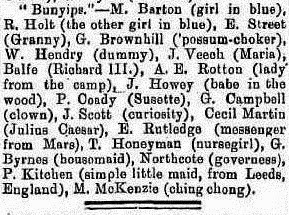 From the Wellington Times, 29 September 1902

A few days later, a follow-up article was included on page 2 of the Wellington Times, after the fancy dress football match had occurred. What a shame there were no photographs! A. Northcote was listed in the Bunyips team. 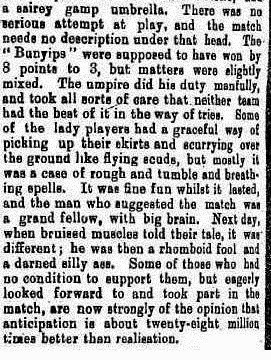 In later years when some of the NORTHCOTE boys moved away from Bourke, there is evidence that at least one of them carried on the footballing tradition in their family. In May 2010, one of my father's cousin's wives, Vivienne NORTHCOTE, gave me a copy of a photo of the Carrington Rugby League Football Club who were the winners of the 3rd grade competition in 1919. William NORTHCOTE, the eldest of the NORTHCOTE boys, is listed as the President. He is located in the middle row, fifth from the right with a black bow tie on. 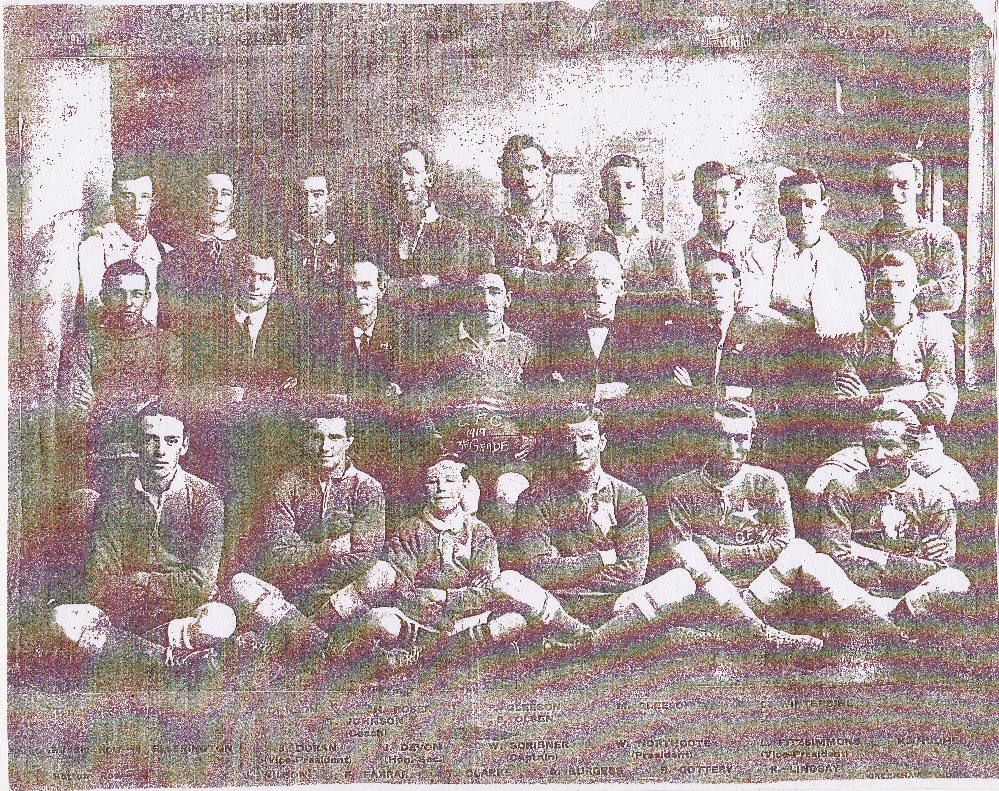 The following article published in 1947 describes the NORTHCOTEs as playing with the Rovers football club in Bourke. 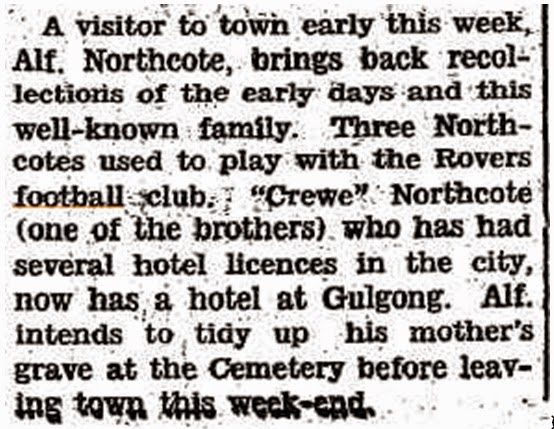 Transcription of the above article:


A visitor to town early this week, Alf. Northcote, brings back recollections of the early days and this well-known family. Three Northcotes use to play with the Rovers football club. “Crewe” Northcote (one of the brothers) who has had several hotel licences in the city, now has a hotel at Gulgong. Alf intends to tidy up his mother’s grave at the Cemetery before leaving town this week-end.

Note errors in the article above:

One of the NORTHCOTE boys, Arthur NORTHCOTE's death was announced in the Western Herald on Friday 5 August 1960 on page 1, as follows: 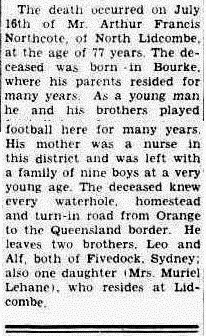 Source: Western Herald,  Friday 5 August 1960 on page 1 under the heading “Personal News Flashes”.
Transcription of the above:

The death occurred on July 16th of Mr. Arthur Francis Northcote, of North Lidcombe, at the age of 77 years. The deceased was born in Bourke, where his parents resided for many years. As a young man he and his brothers played football here for many years. His mother was a nurse in this district and was left with a family of nine boys at a very young age. The deceased knew every waterhole, homestead and turn-in road from Orange to the Queensland border. He leaves two brothers, Leo and Alf, both of Fivedock, Sydney; also one daughter (Mrs. Muriel Lehane), who resides at Lidcombe.

The full article can be accessed here: Personal News Flashes, on Friday 5 August 1960 on page 1 of the Western Herald.


Conclusions from this research

From the articles above, I found out that at least two of the NORTHCOTE boys played football for the football team at Bourke, known as the Rovers. The eldest NORTHCOTE boy, William John NORTHCOTE, continued his connection with football after he moved to Newcastle.

In future, I  need to do some more research into the Rovers Football team from Bourke and the Carrington Football Club. When the Bourke Banner and Darling Representative newspaper come online, this will provide another avenue of research.
Posted by Maria at 21:47