Which uniform is that?

This blog is still on a military theme ...

One of my great-grandfather's sisters was Sarah (aka Sally) KINGSBURY. She was born in 1881 in Flintshire, Wales and died in 1967 in Blackpool England.

Her first husband was Samuel BUXTON. They married in Fylde, Lancashire in 1902. At the time of her marriage, Sarah was about 20. I think this photo may have been on her wedding day or soon after. I guess that the man in the chair is Samuel BUXTON. If I knew what uniform he was wearing, I thought that I may be able to work out what war he was in. 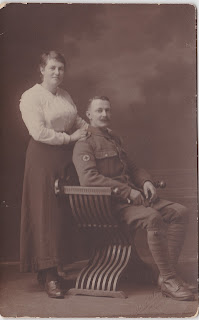 I believe that by 1923, Sarah had had at least four children, possibly five, with Samuel BUXTON but they had parted company. By this time she had met William ABBISS with whom she spent the rest of his life, until he died in 1956, one year after they were married. Sarah finally married William the year that her former husband, Samuel BUXTON, died in 1955.

The photo below of Sarah (Sally) in later years, probably with William ABBISS, seems to have been taken when she was about 50 years of age in about 1931. 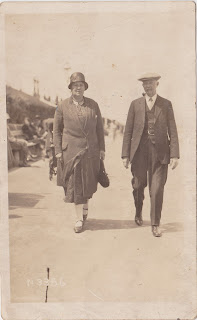 Does anyone recognise the type of uniform the soldier is wearing in the first photo in this blog? I would be grateful for any ideas.
Posted by Maria at 21:02