Ancestors in the movies?

Whether or not you have any ancestors who had links to the movies, you may be interested in Thomas MacEntee's Geneabloggers podcast/radio special being broadcast live next Friday night (18 Nov 2011, Chicago time or 11am, 19 Nov NSW time) about ancestors and their connections to movies.
Most of my ancestors weren't that famous. Some were infamous but that's another story ...
Even so, this topic has got me thinking. You see, my mother's family lived for many years in Beverly Hills, a suburb of Sydney. This suburb was known for its movie theatre. It was especially popular for its Saturday lunchtime movie sessions.
Beverly Hills was originally called Dumbleton, not a particularly attractive sounding name in my opinion. The local residents were of the same opinion and they lobbied to have the name changed to Beverly Hills around 1940. Beverly Hills was known as a suburb in Sydney that boasted one of the first movie theatres. Hence, those who grew up in the suburb during the 1940s and 1950s were frequent movie goers. My mother's family, the WALTERS family, built their home at Beverly Hills in Sydney in 1940: 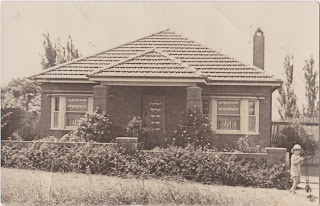 So, that's one slight connection my ancestors have with the movies.
Here is how downtown Beverly Hills in NSW looks today.